Wellbeing at Work | Facilitating Open and Productive Discussion with Images 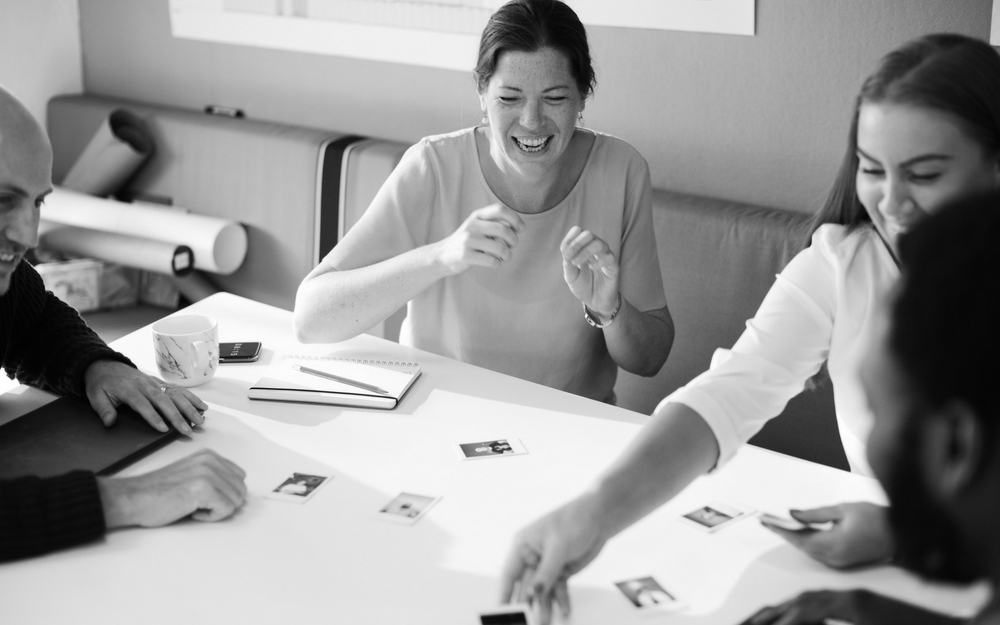 As an employer are there pro-active steps you can take to support your employee’s wellbeing at work? Because if you do it will help improve performance, increase productivity and reduce sickness and absence levels.

Is there anything within your organisational structure, culture or operational processes that may be having a negative impact on the overall wellbeing of your staff. As individuals or within specific teams?

Using a diverse range of images to facilitate discussion, can help identify key themes concerning wellbeing in your workplace for teams and individual employees.

“Individual image cards are an accessible and non-confrontational way of starting and facilitating the flow of group discussions.”

At one organisation participants chose an image that represented their definition of wellbeing, or their current state of wellbeing at work. Key themes emerged collectively, including how the tutors found it difficult to make time for themselves. Plus, the pressure points they experienced at certain times, such as the beginning of the academic year.

From my workshops and 1:1’s I’m aware the former is a common theme and not confined to academics. The latter however, is sector specific. This is important to note, as each industry will experience different key themes or pressure points. Working with images, while remaining open and curious, allows these to come to the fore without judgement or blame. Images are emotive and can evoke powerful memories and emotional responses. This occurs because visuals are encoded in the same part of the brain as emotions. So the two are linked before being stored in long term memory. As participants connect emotionally, they are more likely to open up and be honest about their wellbeing experiences. Enabling rich feedback within these workshops.

This emotive nature of images also means there’s a risk of attendees becoming overwhelmed. (Take a moment to consider how you feel when you see the images used in NSPCC campaigns). However, knowing this, I ensure participants are also fully aware. This sets expectations and normalises the experience. While also reassuring employees they can stop talking if they sense an uncomfortable response to an image.

I refer to this as ‘keeping yourself safe’.  Also advising them only to share what they feel comfortable with. However, the choice is theirs. Often, away from the normal work setting, and with the image as a trigger, employees find it helpful to speak openly to colleagues.  Finding they have shared experiences and can offer each other advice.

Collective themes emerge as participants share experiences through their chosen image. As the discussion develops, the willingness to share increases. Encouraged by facilitated questioning and self-reflection.. During this period, the other participants start to connect with elements of the story and feel able to contribute their views.

This was demonstrated by a tutor explaining his choice of the lioness. He said the roaring depicted his frustration at being unable to express himself due to societal norms. His pent-up frustration would then be released as a ‘roar’. On reflection, he identified that the start of the academic year was the most frustrating.

At this time stress levels became particularly high. By now his colleagues were nodding in agreement. A discussion followed concerning the nature of the pressures, their frequency and the difference between what was external and self-imposed.

This same theme was repeated across the three groups I worked with. Each triggered by the sharing of very different images.

With this knowledge the employers are now in a position to consider strategies to support staff during these ‘pressure points’. Reducing the risk of anxiety, stress, time off and the resulting impact on both staff and students. These strategies could include Lunch and Learn seminars themed around pressure points, group coaching and peer-peer support. Individual insights come in much the same way as the collective ones. Starting with unconsciously choosing an image card, then sharing, questioning and self-reflection. The difference occurs when the interpretation of the image has a strong personal connection, that others don’t relate to as a shared experience.

For example, one tutor realised her definition of wellbeing was different to her colleagues. This made her question if the same would be true of her students. As this was likely to be the case, she considered whether she could unconsciously be imposing her perspective of well-being on them.

A science tutor felt restricted by the curriculum and lesson plans, wanting more autonomy. This left him feeling frustrated. After discussion, he recognised that he’d never taken the time to consider if, within the externally imposed constraints, he could be creative with his delivery. He decided he’d reflect on this further.

One Image, Many Meanings

Individual participants will have their own interpretation of an image card. This happens because interpretation is influenced by unconscious bias, past experiences, gender, culture, age, ethnicity and current situation, etc.

This results in a vibrant and unlimited resource for discussion, as well as a flow of new ideas and understanding between colleagues. This creates natural opportunities for team building, through the deepening of professional and personal relationships.

For example, one participant described the image below as peace. Sharing with the group how she felt content in terms of her wellbeing, seeing only the sun on the water and not noticing the cranes to the right.  During discussion, a colleague, having noticed the cranes immediately, drew them to her attention.

Conversely, this colleague had found the image to be busy and daunting. Having, she said, not really noticed the sun. One image; two very different interpretations. This led to further discussion by the whole group, as they considered what could be learnt from these two different perspectives. This is the second year I’ve facilitated a workshop at the Staff Wellbeing Conference and some of the tutors had attended last year. These participants had a chance to reflect on their choices from the previous year. As images are stored in long term memory, they could remember their choices from 2017.

So where one woman had chosen a bird in flight last year, this year she chose an image of coloured stones instead. It soon became clear that the colours were the most significant aspect of the image for her. So, we spent time talking about the role colour played in her life and how she might use it to support her wellbeing at work.

At the end of each workshop participants are asked to share their learning from the session. Especially if there is a change, no matter how small, they would make. Everyone had something to share, from getting outside more, finding the courage to say no, spending more time writing or rekindling a passion for hill walking.

In 3 hours (one hour per group) the following outcomes were achieved:

If you’re looking for a creative way to facilitate engagement and improve employee wellbeing at work. This style of workshop can be delivered with your team as a Lunch and learn seminar.