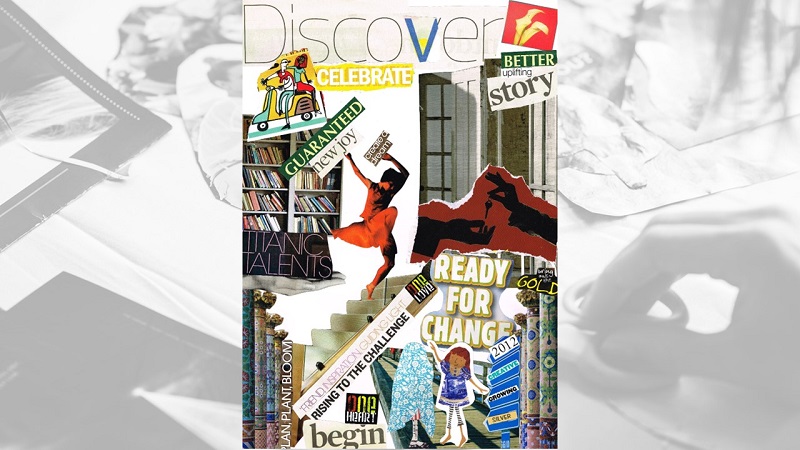 Welcome, and thank you for joining me here for my first blog at UnglueYou®. I can think of no better way to share the story behind starting my business than through collage.

I use collage whenever I need to express what is going on for me but cannot find the words. This approach is helpful because once I express my thoughts, values, emotions etc. visually, I can explain what the images mean. It then remains within my control to decide how much of my story I choose to share with others.

Some of the images and parts of my story may resonate with you. I hope by sharing it in this way that you’ll connect with it on a deeper level than words alone allow. You may also gain an insight into how it can be used in coaching.

This story starts at a stage in my career where I felt stuck. I was unable to express myself creatively at work and under pressure due to external influences on the organisation. Something had to change because my well-being was deteriorating. I went to see a careers coach because I wanted a change of direction but didn’t know what to do instead. During one of my coaching sessions, my coach took me through a visualisation exercise where I spoke about doors opening. After the session and knowing my artistic background, she suggested I represent doors opening by drawing it.

I gave this a go, but the stick figures in my drawing didn’t reflect what I meant. Instead the drawing felt flat and lifeless. So I decided to do what I do best and create a collage using magazines. Because I’d studied Art Therapy for a year I found myself working intuitively and tapping my unconscious.

When looking through the magazines I had no preconceived idea of what may resonate with me. I had the theme I wished to explore and then gathered those images that caused me to react, emotionally or physically. That way I freed my unconscious to do its thing and help me discover through the images what I may not be consciously aware of. This resulted in a collage that not only conveyed the idea of doors opening, but also clearly expressed how I was feeling.

The first image that resonated with me was the girl under the blanket. I felt it so strongly that I had a physical reaction and became upset. This image (courtesy of Marianne Horton’s Small People) perfectly encapsulates how I felt in March 2012. Previously I’d had no words for these feelings other than unhappy. The picture reflected my sense of feeling hidden, restricted, stuck, and unable to express myself authentically.

The second image that drew me was the girl stretching up. When I saw her I knew exactly where she’d go, next to the girl under the blanket. I chose this position because it’s as though she’s removing the cover and saying, ‘It’s time to come out now, to live the life you were created for’.

The lady in red dancing also had a profound affect on me, just like the girl under the blanket. I felt an immediate connection to the vivid intensity of her colour and the striking pose. Both speak to me about freedom of expression, creativity, letting go, doing what you love and being absorbed in the moment. I intentionally placed her on the stairs, surrounded by white space and dancing her way up towards the doors. The keys, being placed in my hand, symbolise that I have the means to open the doors to the opportunities ahead.

Knowing there would be challenges along the way I wanted to remind myself to celebrate achievements. The couple on the Vespa do this for me, evoking memories of scooter rides in Italy. I called the picture ‘The Decision’ because it helped me clarify the thoughts and feelings I was having about my career path. The words ‘Ready for change’ signify that I’m at the start of a road that stretches into the distance. I cannot see the end, but along with the signposts, it signifies the beginning of a new direction. ‘Discover’, also relates to the whole picture, capturing my sense of excitement at the unknown, now that I was ready for change.

I use ‘The Decision’ to motivate me when things get tough. It’s still up on the wall in my  office and continues to motivate, inspire and reveal new meaning for me.

We use cookies to ensure that we give you the best experience on our website. If you continue to use this site we will assume that you are happy with it.OkNo